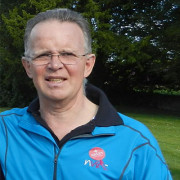 Ted, aged 56 was always fit playing Rugby in his 20’s and Triathlons thereafter. In 1992 he married Kerley (NWUK Instructor) who was a Nursing Sister at the time.

He was a Consultant Cardiologist until he had to retire early on medical grounds in October 2011 with what was all thought to be progressive MS, which had started in the mid 1990’s.

By May 2012 his mobility was very limited, he managed to get around with a stick or Zimmer frame and needed a wheelchair at times.

Kerley became a Nordic Walking instructor in 2010 and was studying the Nordic Walking UK exercise referral course; she thought some of Ted’s symptoms looked more like Parkinson’s Disease that she was reading about. He was reassessed and a Consultant Neurologist agreed; within 2 days of starting new medication he was transformed amazingly, suddenly able to walk 50 yards without even a stick.

Further improvement came with physiotherapy, determination and Nordic Walking instruction from Kerley; Ted started helping at her classes and qualified as an Instructor earlier this year. He has recently walked up Snowdon and uses Exerstrider poles frequently, not just in classes but also walking around town, holiday theme-parks, airports etc. He is adamant that he can’t do without them!!

Ted’s walking has also been helped by a Functional Electrical Stimulation device, with electrodes attached to his left leg, triggered by a footswitch.

This helps to dorsiflex his left foot preventing footdrop and improving his gait, reducing the risk of tripping. One of their regular walkers in Runcorn also has an FES for her MS and ted has a keen interest in how Nordic walking and these devices can impact on mobility for PD. He is more than happy to share his story and join in discussion relating to both Parkinson’s and MS.